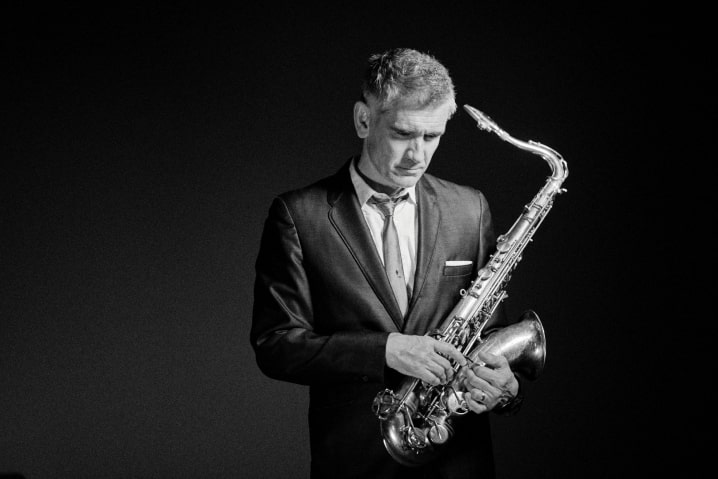 I cannot think of another vocalist who creates such an exuberant combination of bebop artistry and raw emotion.”
—London Sunday Times

When Curtis Stigers came on stage on Wednesday night, it felt as if someone had upped the wattage in the bulbs.”
—Wall Street Journal

For the past 30 years, the singer, songwriter, saxophonist and guitarist has been making records that confound those who try to categorize his music or put him in a box.

Who is this guy?

Curtis Stigers’s new album This Life is the answer to that question. It’s a celebration of three decades of musical exploration, evolution and growth. It’s a look back at 13 albums, thousands of concert performances and millions of miles on the road. “We created most of these arrangements onstage, during soundchecks and concerts,” says Stigers. “My songs have changed and grown as they’ve gotten older, just like I have.”

Curtis Stigers burst onto the recording scene in 1991 with his eponymous debut album, which sold 1.5 million copies and spawned several self-penned, pop/soul-flavored hit singles, including “You’re All That Matters To Me,” “Never Saw A Miracle” and the worldwide top-ten hit, “I Wonder Why.” The 25-year-old NYC-based musician then toured the world in support of the album, opening shows for the likes of Elton John, Prince, Eric Clapton, James Brown, Joe Cocker, Rod Stewart and Bonnie Raitt, and made multiple appearances on the TV show circuit, including The Tonight Show, David Letterman, Arsenio and The Today Show. Heady times for a kid raised in Idaho who grew up listening to records by artists as diverse as Stevie Wonder, Elton John, Frank Sinatra, Steely Dan, Joni Mitchell, The Band, Elvis Costello, The Stranglers, Pretenders, Squeeze, XTC, Ray Charles, Joe Williams, Tom Waits, Led Zeppelin, Sarah Vaughn and Miles Davis.

Growing up in Boise, Stigers studied music in school and spent a year away at college on a jazz scholarship but found he was better suited to an education gained by playing in bars and clubs, with bands running the stylistic gamut from punk-rock (as a drummer) to blues and soul (as a saxophonist) to jazz, most notably at the Tuesday night jam-sessions run by the unlikely Idaho-transplant Gene Harris, a legendary and influential pianist best known for his many recordings on Blue Note Records.

In 1987, 21-year-old Curtis Stigers relocated from Boise to New York City in search of new challenges and a shot at the big-time, whatever that meant. “I just knew I needed to get out of town to continue to learn and grow as a musician,” he says. Stigers broke into the NYC live music scene playing the blues clubs in Greenwich Village, first as a saxophonist and eventually as a singer and burgeoning songwriter. After a few years on the scene, Stigers was spotted by several A&R execs while playing a Sunday night jazz gig at an Upper West Side restaurant, where he and his trio experimented with playing jazz versions of songs by modern songwriters like Elvis Costello, Tom Waits and Donald Fagen, in addition to jazz standards and Curtis’ own pop-soul originals. He eventually signed a deal with Clive Davis and Arista Records and set out to write the rest of the songs for his first album with several collaborators, including Glen Ballard and Barry Mann.

After the success of his first album, Stigers was eager to continue to evolve and tried hard to write and record a more rootsy, edgy, organic-sounding follow-up, but he ran into strong resistance from Arista president, Davis, who preferred to see Stigers following Arista’s patented middle-of-the-road pop model, with slick production and songs written by hired-guns. A creative stalemate resulted, and when his second album was finally released four years after his debut, Stigers found the pop radio world had moved on without him. Soon after, he managed to convince Davis to release him from his Arista contract and he moved to Columbia Records where he released his third album, the singer/songwriter-flavored Brighter Days, which allowed Stigers to finally make the rootsy album (with Jim Keltner, Benmont Tench, Chuck Leavell, Jackson Browne, Ed Cherney and more) he’d been fighting to make for years.

After less-than-stellar sales of that album, Stigers realized he had a big decision to make. Should he continue to try to chase radio hits in a world that didn’t seem to appreciate his appetite for artistic growth or should he try another road entirely? After a heart-to-heart talk with his friend and musical hero, legendary jazz saxophonist Michael Brecker, Curtis decided to take the leap and begin a new chapter: He signed a record deal with Concord Jazz.

“Over the years, my fans have asked me for new recordings of these rearranged versions of my old songs that they hear at my shows,” Stigers says. “That’s part of the inspiration for this new album.”

Which brings us back to the new album, This Life.

The album opens with Nick Lowe’s “(What’s So Funny ‘Bout) Peace Love And Understanding”, a song Stigers originally recorded in 1992 for the soundtrack album to the movie The Bodyguard which, thanks to five massive hit singles from Whitney Houston, sold more than 45 million copies. “This new version came about gradually over years as we tried out different arrangements and grooves,” Stigers says. “We finally settled on this funky, cool 1960’s soul-jazz bossa nova vibe.”

The unabashed love song “Keep Me from the Cold” is a co-write with Glen Ballard, which Stigers says he hoped would be the hit single from his 1995 sophomore album.

“That was the one that got away,” acknowledges Curtis. “It’s one of the best songs I’ve ever had a hand in writing and I’m grateful it gets another chance here, in a more stripped-down, acoustic setting.”

Stigers originally wrote and recorded “You’re All That Matters To Me” for his first album. Initially a nod to the Brill Building hit “You’ve Lost That Lovin’ Feeling,” it has gradually evolved into an intimate jazz ballad. Curtis explains, “It’s the first time I’ve played soprano sax on one of my albums. I was shooting for the emotional tone and effect Wayne Shorter’s horn had on Joni Mitchell’s records.”

Emmylou Harris’ sexually charged “I Don’t Want to Talk About It Now” takes on a New Orleans feel, with hints of Elton John in Matthew Fries’ piano, Van Morrison in Curtis’ vocals and Allen Toussaint in the arrangement. “Oh my god, I love Emmylou,” Stigers laughs. “This is a smokin’ hot song about sexual obsession and I’m 100% here for it.”

Stigers and his band take his biggest hit “I Wonder Why” to the church, with Matthew Fries adding the classic gospel touches to the piano part. “I don’t think I’ve played a concert since 1991 without singing this song,” says Stigers. “It’s been a huge part of my life and career.”

The primal, tribal tom-tom beat of the title track, “This Life,” which Stigers co-wrote—he was nominated for an Emmy Award—and sang as the theme song to the wildly popular TV show Sons Of Anarchy, maintains the original recording’s ominous dread while trading blaring blues-rock guitars for a swampy, trance-inducing groove.

“Swingin’ Down at 10th & Main” sports a jazz-blues shuffle that reaches back to the origins of its inspiration, Gene Harris’ Tuesday night jam sessions, which a teenaged Curtis Stigers regularly attended at the historic Idanha Hotel in downtown Boise, now the home of funky apartments and a hipster donut shop.

The Gershwins’ classic “Summertime” and Leonard Cohen’s “Tonight Will Be Fine” are the only two selections on the album that Stigers has not recorded previously. “Summertime” is based on a reggae-flavored arrangement from The Young Jazz Lions, the first band for which he was the lead singer, back in his late teens, and is dedicated to the group’s late piano player, and Curtis’ dear old friend, Paul Tillotson. As for covering Cohen’s “Tonight Will Be Fine,” Stigers says, “As with most Leonard Cohen songs, it’s dark, sexy and bittersweet. We created a very jazz-oriented arrangement on the road, but we actually learned it from Teddy Thompson’s country/folk-flavored live recording, so it’s been filtered through several different lenses to get to its current state.”

Stigers wrote “Don’t Go Far” with acclaimed folk and country singer/songwriter Beth Nielsen Chapman in her Nashville kitchen. “It was one of my favorite songwriting experiences ever,” Stigers gushes. “Years later, my band and I started playing it at soundchecks and found a very different, more jazz-inspired way of playing it, compared with the spooky, other-worldly version I recorded for Brighter Days in 1999.”

The album finishes with a love song Stigers wrote for his first album with the legendary songwriting genius, Barry Mann. “My band,” Stigers says, “helped me transform this from a smooth pop/gospel wedding anthem into a lovely jazz ballad.”

During the pandemic, Curtis Stigers began a weekly internet livestream show called “Songs From My Kitchen” which he continues to present every Wednesday with his four very cute dogs.

Born in Hollywood, raised in Idaho and transplanted to Manhattan, he now resides, between concert appearances, back in Boise, where he’s proud to help raise hundreds of thousands of dollars each year for the Interfaith Sanctuary Homeless Shelter. 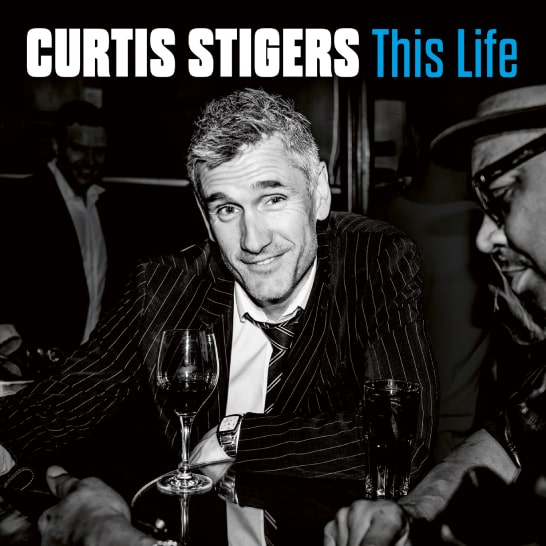 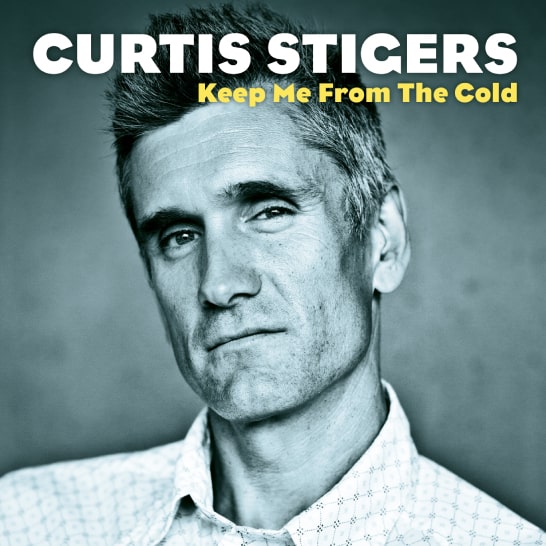 “Keep Me From The Cold” (Single) 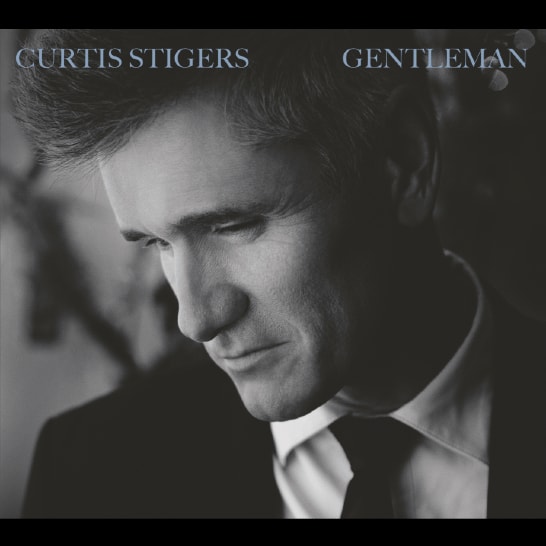 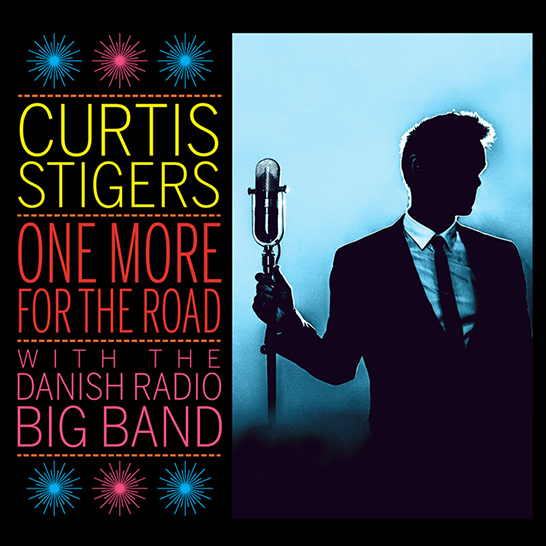 One More For The Road (Live)